At Deep Sea World, we understand how important conservation is. Sadly, as a result of pollution, littering, overfishing, and the changing climate, many sea and aquatic creatures are threatened in seas and rivers around the world.

We aim to highlight and educate our visitors as to the biodiversity of the planet’s aquatic environment and what steps we can take to conserve and reduce the impact mankind has on these ecosystems.

Captive breeding is an important aspect of Deep Sea World Aquarium’s philosophy and an excellent indicator of the health and well-being of our stock.

Captive breeding not only helps ease the pressure on wild populations but also allows more research to be done both on their behaviour and on ways to help safeguard their long term future in the wild. 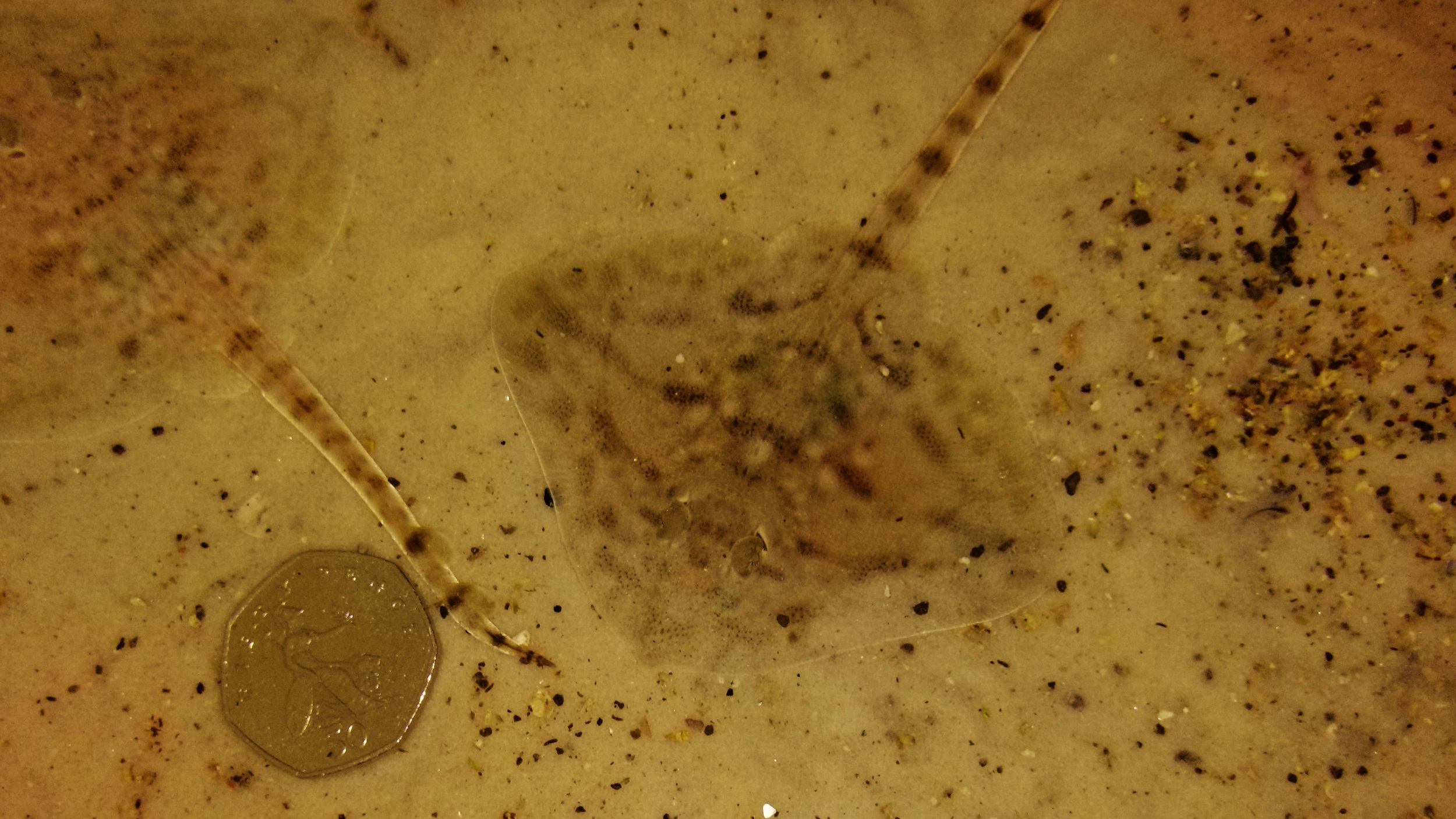 In addition to our success in breeding the critically endangered Angel Shark in 2011 we regularly collect Shark and Ray eggs from the main Deep Sea World tank with a view to hatching and rearing young and have successfully reared the following species :

We continue to monitor our Angel Sharks for signs of reproductive behavior and outcomes, but we also have males and females of both the Eagle Ray and Common Stingray and hope to achieve some success in developing a captively bred group of these animals. Indeed we have some rare footage (below) of the Common Stingrays engaged in a reproductive encounter within our main tank. We observe and monitor  the animals on a daily basis to detect any outcome to this behaviour, watch this space!

All of our Angel Sharks, Eagle Rays and Common Stingrays are micro-chipped and are listed under the European Association of Zoos and Aquaria (EAZA) monitoring programmes coordinated by the Fish and Aquatic Invertebrate TAG. These monitoring programmes allow for joint research of all member aquaria which have these Shark Species amongst their collections.

At Deep Sea World Aquarium our ‘Amazon’ display is filled with unwanted animals, from Red Tailed Catfish and Alligator Gar to Pacu. These species had all outgrown their home aquaria and were subsequently donated to us.

See the following link to find more about this campaign: http://www.bigfishcampaign.org/

REMEMBER: Do you research before purchasing an animal! 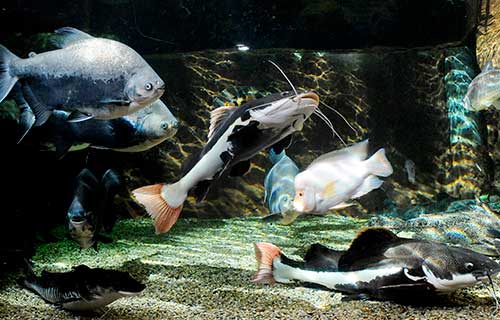 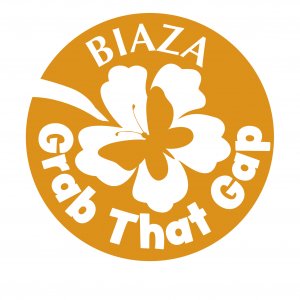 We are working with BIAZA to make our site a better place for our native species. We’ve planted an area with wildflower seeds to watch them bloom and see which species they attract!

BIAZA’s Grab That Gap campaign encourages all their members to grab a small (approx. 10m2) area of unused space within their grounds, and plant it up in Spring with wildflower seeds, provided by Emorsgate Seeds.  This is part of a wider effort to improve management of our sites for native species. 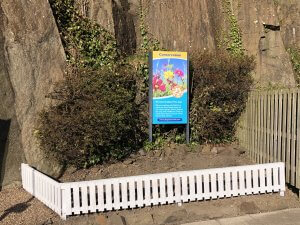 We grabbed the gap with the help of North Queensferry Primary School who assisted us with the sowing of our wild flower seeds in early May. 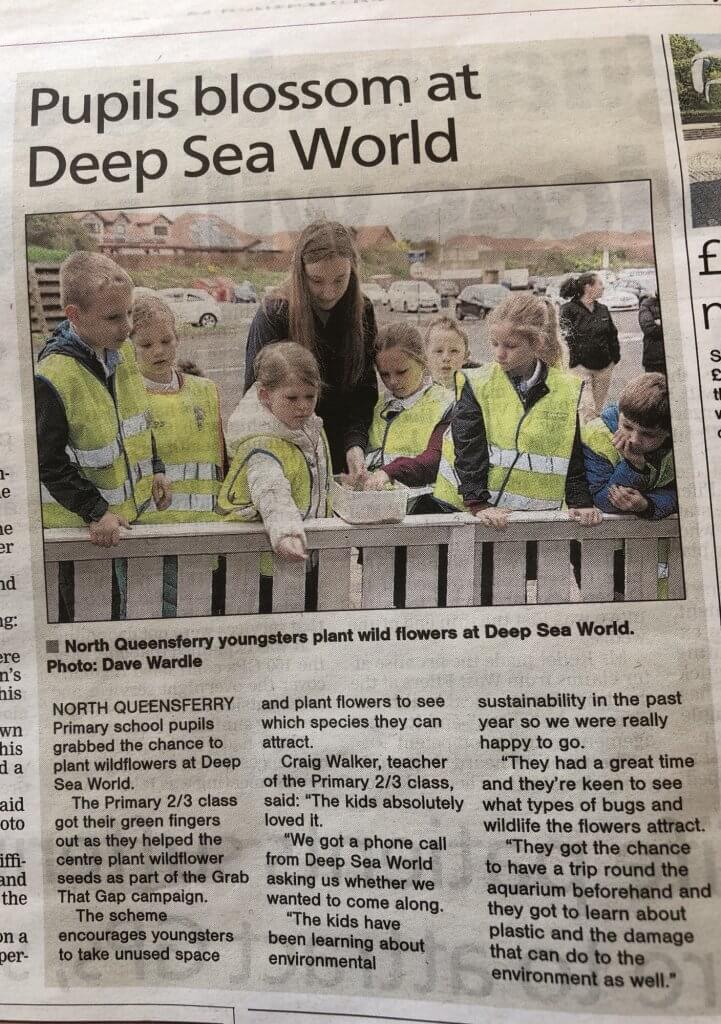 We help raise money for the Shark’s Trust!

Many sharks are on the ‘list of threatened species’ and conserving these incredible animals is becoming increasingly important to secure their future. From signing petitions to ban shark finning to hosting your own shark egg case hunt there are so many ways to get involved.

See the following link for more information about this charity: http://www.sharktrust.org/

The Angel Shark Project aims at securing the future of the critically endangered angel shark throughout its range by collecting data to inform conservation.

On 16th July 2019 Angel Shark Project visited us here at Deep Sea World to gain some samples to trial their new eDNA research posting on their social media:

Big thank you to the Deep Sea World Edinburgh for their help and support.” 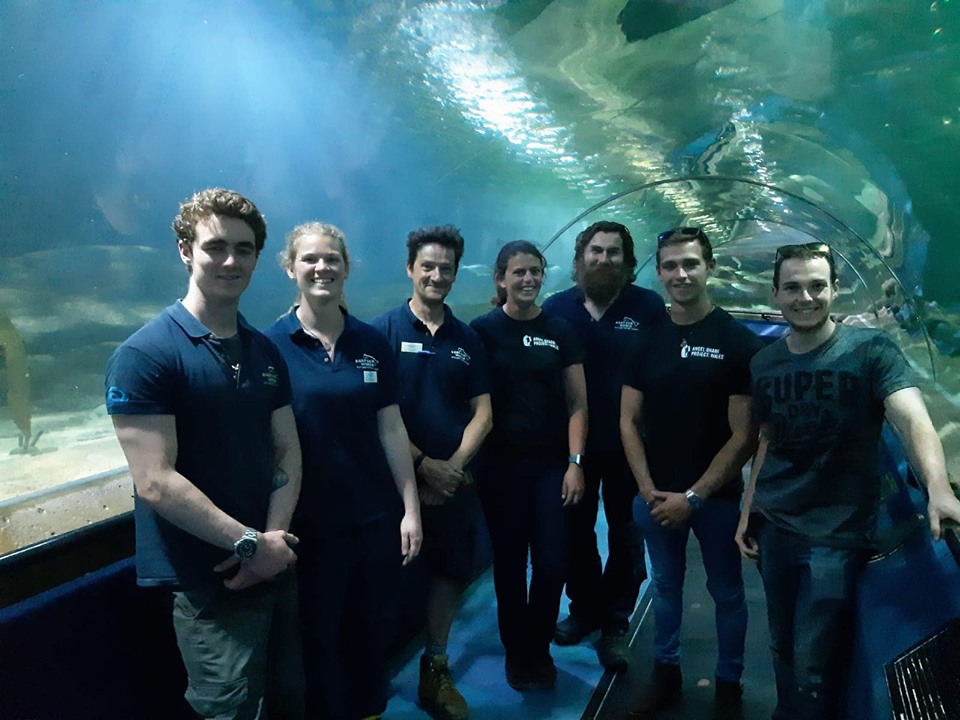 { UPDATE – MARCH 2018 : Whilst we have continued to monitor the Angel Sharks for signs of reproductive activity we have not had any further pups delivered since the successes of 2011. Although we did suspect a pregnancy in July 2016, but we were disappointed that an ultrasound examination produced a negative result.

We are hoping that there may be some positive news from the arctic weather conditions dubbed the ‘Beast from the East’ in early March 2018 which maintained low (sub 10 degree) temperatures in our main tank for a longer period after the winter months. These conditions were comparable to those back in 2011 when our Angel Sharks last produced their pups. Watch this space later in the year for updates!}

Our collaborative project with Blue Reef Aquarium Hastings involves the only captive mature angel sharks (squatina squatina) in the UK. The breeding project started in 2002, when we transported one of our two male sharks to Blue Reef Aquarium Hastings, which at the time held a female angel shark. According to the American Elasmobranch Survey of 2008, only four adult angel sharks of this species were held by UK aquaria. Thus, the project has been vital to the future of these sharks in the wild, particularly in UK waters.

The History of the Critically Endangered Shark
There are 16 different species of angel sharks found around the world. Historically, the angel shark particular to our project has inhabited the temperate waters of the north-eastern Atlantic, from southern Norway and Sweden to the Western Sahara and the Canary Islands (including around the British Isles, and in the Mediterranean and Black Seas).
The World Conservation Union’s (IUCN) Red List of Threatened Species first classified this shark species as ‘Vulnerable’ in 2000. In 2006, this was sadly further upgraded to ‘Critically Endangered’ around the world, with the species declared ‘Extinct’ in the North Sea.
In 2008, angel sharks were given additional protection within the Wildlife and Countryside Act (1981). This prohibits intentional capture, and makes it mandatory for any of the species to be released without harm if they are caught in fishing nets.

Angel Shark Profile
Angel sharks dwell in temperate water along the seabed, at depths of up to 150 metres. As nocturnal creatures, they prefer muddy or sandy bottoms, lying buried under cover of the seabed with only their eyes protruding during the daytime.
Due to this, they are highly vulnerable to being caught as by-catch through trawl fishing, set nets, and bottom longlines. Historically, angel sharks have long been exploited for human consumption, supplying their skin as leather, their flesh for food, and their organs for oil.
It takes angel sharks around 8-12 years to fully mature, reaching up to two metres in length. This slow growth means that very few angel sharks ever reach maturity and breed, resulting in an ever-declining population. Through successful breeding and without human threat, they can live as long as 35 years.

Our Project Details
In 2004, a female angel shark was transferred from Blue Reef Aquarium Hastings to Deep Sea World, where she was introduced to the second male within our 4.5 million-litre shark tank. Since then we have recorded both the mating and the breeding behaviour.
We suspected the female was pregnant in April 2007, when she visibly changed shape on her underside. At that point we investigated if it was in fact possible to scan a shark for pregnancy. Two months later, in July, we were able to perform an ultrasound scan, confirming, to our excitement, that she was pregnant. This incident is thought to be the first scanning of an angel shark.
Our initial estimates suggested that the embryo angel sharks were around four months along. The pregnancy of angel sharks typically lasts around 12 months, with the females giving birth to between nine and 20 young, each measuring around 20 to 30 centimetres in length. Unfortunately, the female produced three stillborn pups over a period of several months towards the end of 2007.
In August 2011 we suspected that the female was pregnant again. In November of that year, following veterinary advice, the zoological team at the aquarium examined the female. During this examination, a single premature pup (i.e. an egg sac still attached) was born. In the following weeks, the female was assisted in birthing 18 further pups.

This, as far as we know, is yet another world-first for this particular shark – the world’s first captive-conceived angel shark pups. Following captive-breeding successes in America with the pacific angel shark, this was great news for the species in the UK. Our project has given hope for the future, highlighting that breeding within a captive environment can be successful.