One thing that really grabs our attention in those popular nature documentaries is the many different forms that courtship can take on in the animal kingdom: the fascinating dances of the birds, the pirouettes of the dolphins… but, have you ever wondered what courtship looks like underwater?

A definitive courtship is rare in fish, since it’s a complex set of behaviours that will lead to mating. By using courtship behaviour, a fish communicates to each of the potential mates that it’s not a threat and that it’s suitable for mating.
Pre-mating activities are, for the most part, ritualistic. In fact, courtship is usually minimal or almost non-existent for fish that spawn in large groups. Whereas in species where courtship is evident, their courtship behaviour consists of a series of fixed action patterns that trigger appropriate fixed reaction by the potential partner, with one action stimulating the next.

Courtship allows one of both sexes to select a mate from a pool of candidates (get it, pool?), but in most cases, the females do the choosing – so what does a fella have to do to pander to a fish?
Here are a few examples:

Ladies, you’d be hard pressed to find anyone more creative and more dedicated than the Japanese puffer fish! 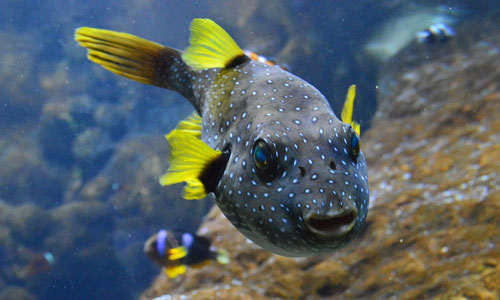 Male Japanese puffer fish create grand sand sculptures – which consist of patterns of circles not too dissimilar to crop circles! – on the featureless seabed to attract females. The males draw these amazing patterns in the sand using their fins, which can take up to a week of intense labour – if that’s not dedication, we don’t know what is!

Okay, the grunting and rumbling mating calls from male drummer fish may not be mariachi, but it sure gets the job done!
Male drummer fish use their air bladders to produce croaking or drumming sounds – that travel at low enough frequencies and long enough wavelengths to be heard through sea walls, into the ground, and through concrete construction! – all that to serenade female fish. Any male that grabs the attention of a female with its ‘sweet music’ will swim to the surface of the water, where they’ll meet and mate with their baby mama. 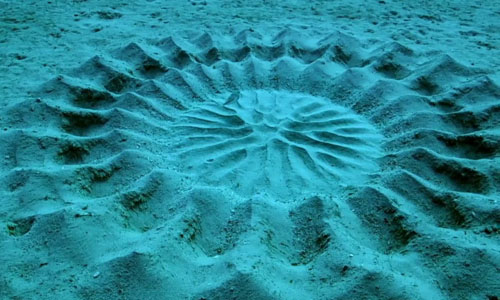 Seahorses are famous for being a monogamous species, meaning that they mate for life – even though there’s (literally!) plenty of fish in the sea! 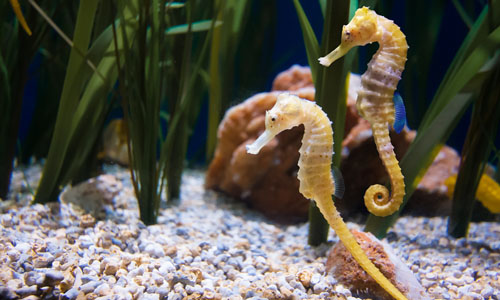 Courtship in seahorses includes caresses, hugs, and dances – Dirty Dancing-style! That’s right, to reinforce pair bonds, seahorse couples come together every morning to dance… for up to eight hours. By doing so, the couple can also assess each other’s reproductive status and get an idea of when they’re ready to take the next step in their relationship.

Love Is in the Air (Bubbles)

With almost 33,500 species of fish, you can imagine that there’s a multitude of different ways to court the opposite sex beneath the surface. We hope that this blog has given you a glimpse to romance underwater!
If you’d like to spend your Valentine’s Day with some fishies, make sure you check out all our fishy exhibits and get your tickets for the big day in advance!