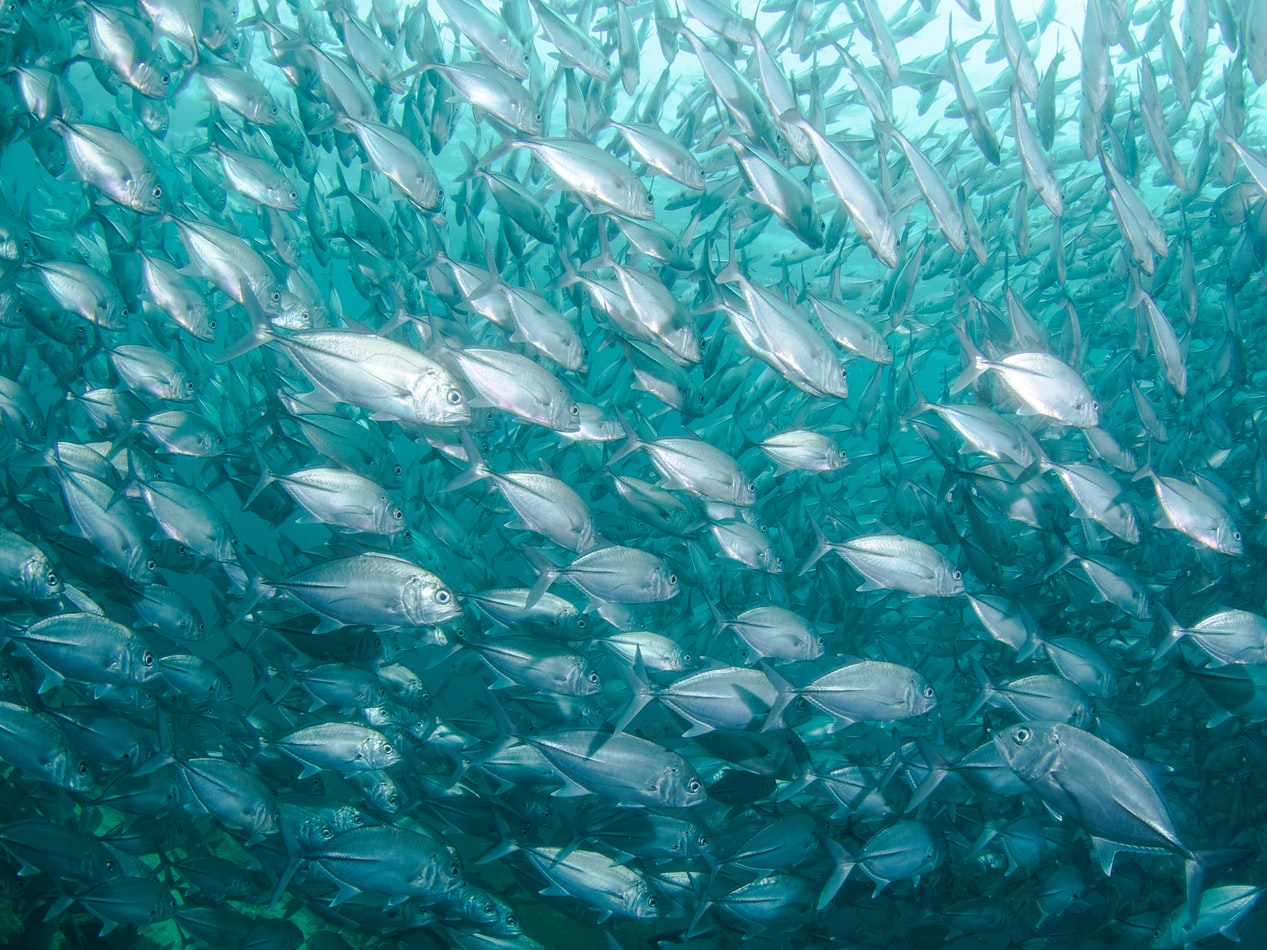 There’s nothing quite like watching fish swim perfectly in-sync with each other in one big group. They change direction within a second, left, right, up, down, effortlessly coordinating their moves. But not once do they bump into each other.  This mesmerising behaviour is known as swimming in a school and it’s a wonder of the natural world. But why do fish do this, and what makes it possible?
Although the science of schooling isn’t fully yet known, it’s been widely studied with many theories as to why fish like swimming together. Here’s everything the experts know!

What exactly is a school of fish?

A school is a group of fish from a single species, working together and swimming in the same direction. Be careful not to mistake it for a shoal… A shoal is a single species of fish hanging together in a group, but swimming around in different directions. A subtle difference, but a difference nonetheless!
So, how many fish make a school? Well, there isn’t an exact number, but in the wild, you can find schools with hundreds or even thousands of fish. Impressive right? The minimum number of fish you’d need to create a school would be at least 4.

It’d be easy to assume that fish swim in schools because they simply enjoy spending time together, just like us humans. Although it’s a nice thought, and we’re sure they do appreciate the company, science says otherwise.
Studies suggest that schooling isn’t a learned behaviour, and instead appears to be ingrained in their fishy genes. Many species evolved to swim this way to protect themselves from predators, increase the chances of finding their next meal, and also to help them swim more efficiently.
How does this work? Well as the saying goes, there’s safety in numbers. It’s a lot easier to hunt and wolf down a little fish swimming on its own, compared to singling out and attacking a fish from a large group. The hundreds of identical fish confuse predators and make it a lot harder for them to fill their bellies.
The close proximity of this swimming style also reduces friction between the fish. You wouldn’t think it, but this reduced friction means it’s less effort for the fish to swim, helping them conserve their energy.
Swimming in a large group also makes dinner time a lot easier. When you’ve got thousands of beady eyes on the look-out for something tasty, it takes half the time to capture your prey.

How do fish swim so closely without bumping into each other?

This is where it gets scientific. Fish have lots of senses, including their sight, smell and hearing. It’s the use of these senses as well as others, which help them glide smoothly together in time. The fish react to the movement of those surrounding them, so if one fish changes direction, the rest of the fish in the school sense the movement and follow. Pretty cool, right?

Not all fish swim in schools…

Most fish swim in a school at least once throughout their life, however, there are a few species which simply prefer living alone. Although it’s more common to find smaller fish in a school, like basslets, fusiliers and herring, some large fish do too. For example, salmon, barracuda and bluefin tuna.
Did you know? Even fish like piranhas can be found swimming in a school. In this case, piranhas are born into a school, and if an unrelated piranha tries to join later in life, it’ll be attacked and killed by the others.

Want to see some schooling in action? Visit Deep Sea World and get up close to piranhas, cichlids and more!

Don’t forget, save 10% when you buy online, get your tickets here.