Have you ever felt so stressed your going to explode well you might feel at home with the pufferfish family.

Figure of 8 pufferfish are found in streams and estuaries of Southeast Asia, including Borneo, the Malaysian peninsula, Sumatra, and Thailand. They are easily identified by their colourful green and yellow patterned body that varies from fish to fish however all have markings either side of the caudal fin resemble the number eight inspiring their name.

Puffers have two pairs of teeth, each of which is fused together, giving it a beak-like appearance. This unusual arrangement of teeth gives it the ability to crush hard materials such as the shells of crustaceans as well as making them incredibly cute.

The figure of 8 pufferfish is a peaceful member of the often aggressive puffer family (Tetraodontidae). They are able to inflate themselves with water or air when under stress or threatened, This can be intimidating to predators as they struggle to eat the inflated fish. They do contain poison so are only dangerous to other animals if they are eaten unlike venomous fish such as Lionfish who protect themselves by injecting venom to their predators. 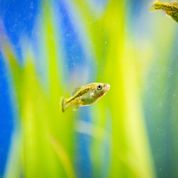 After thought to be extinct a small population of Ameca Splendens were found in a waterpark in Mexico They particularly enjoyed the Lazy River.