Just having a Splenden day out at the waterpark!

Ameca Splendens also known as Butterfly Splitfins are a bony fish that were once found throughout the Ameca River drainage, but are currently listed as extinct in the wild. This designation could be outdated though, as there have been reports of a remnant populations being discovered in of all things, a Mexican waterpark. There have also been unconfirmed reports of feral populations in the United States, most likely the result of aquarium releases and escapes.

Although small if you look closely these are very beautiful with a large dorsal fin which like the caudal fin is washed with black. A yellow band stretches along the caudal’s back margin. The body of both sexes is ochre, with silvery sides and a brownish back, which in males usually have numerous glittering metallic scales. Females and juveniles have black dots on the sides and ochre fins.

These omnivorous fish are best known for eating algae however are a very competitive fish. Once popular fish for home aquarium enthusiasts these fish do not go well with others as any fish similar in size would often lose out on food from the fast and aggressive Ameca Splendens.

Extinct in the Wild 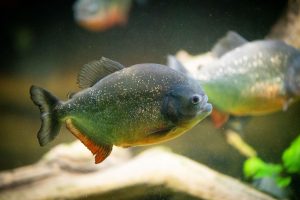