One of our most impressive species at Deep Sea World is the sand tiger shark. A stealthy hunter, this particular breed glides slowly through the waters of Australia, Japan and the Mediterranean, hunting alone or in groups known as shivers. 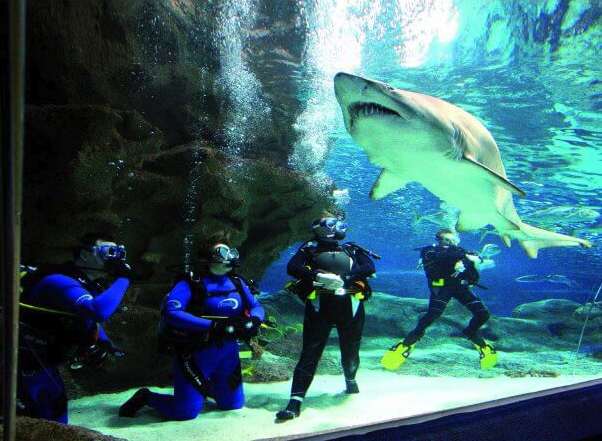 Growing to over three metres in length, this is a creature you need to see up close. But don’t be fooled by their formidable size, fearsome stare and crooked teeth, the Sand Tiger Shark is a creature that proves appearances can be deceiving. Here’s everything you need to know.

Related to the great white shark

That’s right. Despite its similarity in name, the sand tiger shark has no relation to the more aggressive, ill-tempered tiger shark family. It is however, the cousin of another well-known predator, the great white shark. Both species belong to an order of sharks called Lamniformes, who share a number of physical similarities; five pairs of gills, two dorsal fins and a large mouth filled with rows of pointed teeth for hunting.

The sand tiger shark’s behaviour is very different to its cousin. Whilst the great white is very much top of the food chain and regarded as one of the ocean’s primary predators, the sand tiger shark by comparison is actually quite docile. Not considered a threat to humans, this species chooses instead to feed on small to medium fish, squid, skates and other smaller sharks. It’s huge mouth of outward pointing teeth are perfect for puncturing the slippery skin of smaller fish. This mild-mannered behaviour makes it a very popular species for aquariums around the world.

During the day the sand tiger shark stays in relatively shallow waters, taking shelter in caves or near rocks and submerged reefs. They are also known for exploring shipwrecks and other structures on the ocean floor. At night they leave the safety of their shelter and venture into deeper waters, scanning the ocean surface for prey. They are also known to hunt in groups (or shivers), surrounding shoals of fish and picking them off with superior speed and reactions.

One of the sand tiger sharks trademark behaviours is its steady, almost motionless glide through the water. It achieves this by swallowing air at the ocean’s surface and turning its stomach into an air pocket. It then uses the air to maintain a level buoyancy underwater, releasing pockets of air to reach deeper level. This trick allows it to drift through waters undetected, an excellent skill for hunting.

Dive with the Sand Tiger Shark!

At Deep Sea World, you can get up close and personal with the sand tiger shark and a huge variety of other species in our shark dive experience!

Find out more about our shark dive experiences and gift vouchers