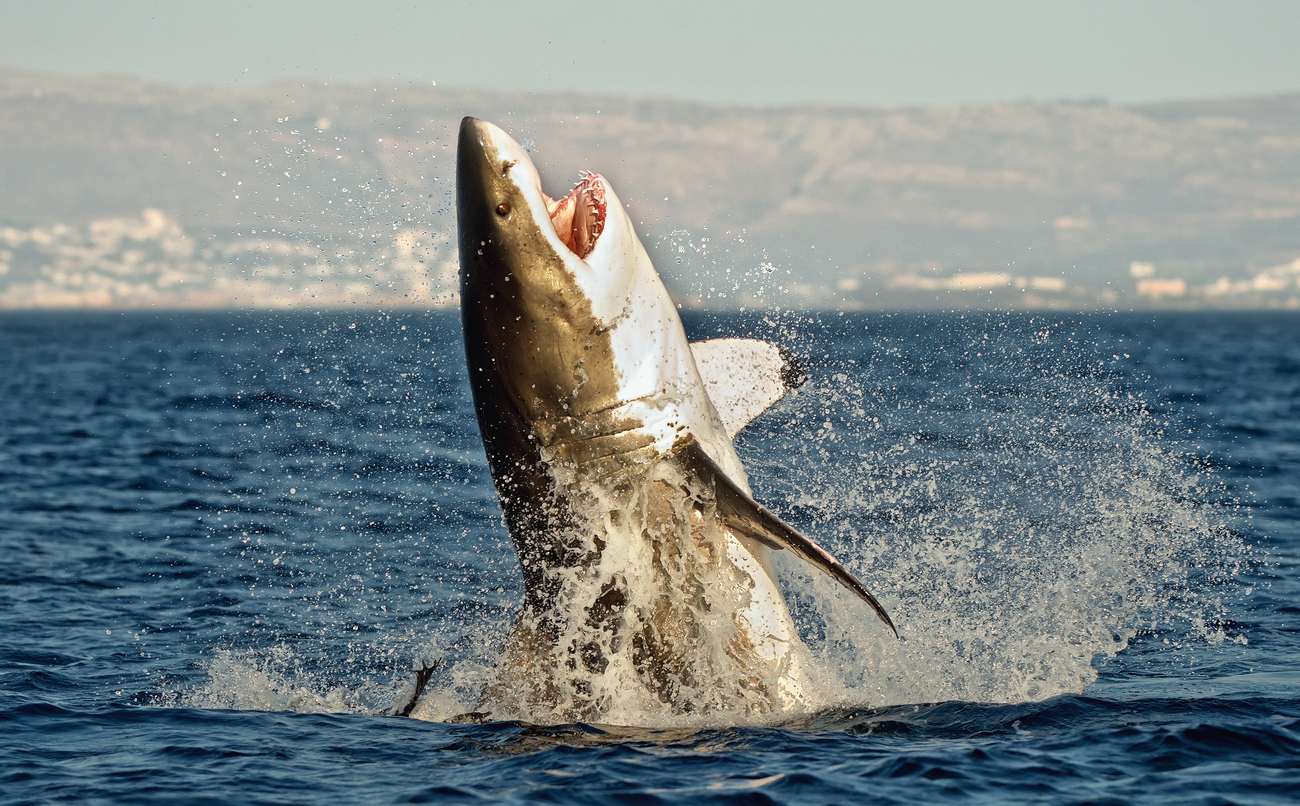 Meet the Megalodon: The Biggest Shark that Ever Lived

From Jaws and Deep Blue Sea to the recent big shark horror film, The Meg, big sharks have long been a source of fear and fascination. And if there’s one fish sure to instil galeophobia – or fear of sharks – it’s the striking, utterly massive megalodon.

An apex predator of unrivalled size and strength, the megalodon was the king of the deep blue for millions of years, topping the food chain with its tremendous bite and sheer power. Those of a nervous disposition when it comes to sharks will be pleased to hear that this bus-sized fish has long been extinct, but even after 3.6 million years, the meg continues to capture our imagination.

Keen to learn more about the mighty megalodon? Then join us as we explore this incredible fish in greater depth, from its size, shape and appearance, to its diet, bite strength, and the circumstances behind its disappearance all those years ago.

Use the links below to navigate our guide or read on for our ultimate guide to the meg.

What is a Megalodon?

The megalodon was a prehistoric shark, which ruled the waves millions of years ago. An apex predator of commanding size and strength, megalodons are the largest sharks to have existed, and would have been very much at the top of the oceanic food chain all those years ago.

Megalodons were not only the biggest sharks, but the biggest fish ever recorded on Earth – eclipsing even the whale shark in length and scale (which is the largest fish in our oceans today). These colossal predators are known to have been three times larger than the biggest great whites ever recorded – giving you an idea of their extraordinary power and ferocity.

Biologists have been studying the megalodon for decades, and their fossils are relatively common. Their teeth, in particular, give a clue as to their size and potency, and are among the remains most frequently discovered. Reaching 18 centimetres in length (that’s about half a foot), it’s clear where these predators got their name – with ‘megalodon’ translating to ‘big tooth’ in Ancient Greek.

What’s most fascinating about megalodons – aside from their extraordinary size – is how well they were adapted to the world’s oceans. Biologists have discovered megalodon fossils on every continent except Antarctica, and believe that the shark will have been a prolific hunter in both warm and cold seas – a trait shared by only a handful of their modern-day predecessors.

How Big is a Megalodon?

Megalodons were big, very big. So big, in fact, that their average length was akin to that of a large whale shark – the biggest fish in our oceans.

In studying megalodon fossils, biologists have built an accurate picture of their size and appearance. Estimates suggest they averaged around 15-18 metres, and were similar to the modern-day blue shark, with angled pectoral fins and a long snout.

A common misconception about the origins of megalodon sharks is that they are the early ancestors of the great white shark, but scientists have found this not to be the case. Instead, megalodons were part of a separate lineage of prehistoric sharks, of which they were the last member. Indeed, they may even have seen their younger cousins as food – with studies revealing that megalodons almost certainly snacked on smaller sharks, whales and other large creatures of the deep.

To put the megalodon’s massive size into perspective, here we rank it alongside other leviathans of the natural world, as well as a few recognisable objects and landmarks.

Yes, megalodons are extinct, despite what Jason Statham would lead us to believe. Megalodons were around in prehistory, and went extinct approximately 3.6 million years ago, during the Pliocene era.

But why did the megalodon go extinct? Scientists understand this came as a result of a period of global cooling, when the temperature of our oceans dropped by several degrees. This had a major impact on organisms throughout the food chain, with 43% of sea turtles and 35% of sea birds becoming extinct as a result.

The disappearance of prey naturally resulted in the loss of key apex predators, including the megalodon. Through history, marine animals, particularly fish, have reduced in size as a result of evolution, which is why we no longer see massive predatory fish like the megalodon in our seas.

What Did Megalodons Eat?

Megalodons were at the top of the oceanic food chain, with few marine animals safe from their massive jaws. You need only look at their 18-inch serrated teeth to see that they were serious hunters, capable of bringing down some of the biggest animals to have existed in our oceans.

In examining the fossils and teeth of the megalodon, scientists estimate that their jaws would have spanned around 3.4 metres – roughly the same length as a Volkswagen Up! hatchback. Inside were over 270 A4-sized teeth, capable of delivering one of the most powerful bites known in the history of world predators.

A huge mouth for a huge animal, and the megalodon will have needed to eat a lot to keep its energy levels high as it swam the world’s oceans. Scientists believe almost all other large fish, including sharks, were on the megalodon’s feeding menu, as well as mammals like dolphins and whales.

Where Can I See Megalodon Fossils?

Megalodon fossils, particularly teeth, are surprisingly common – which makes sense, given that each of these colossal sharks was packing over 270 of them. Teeth are also the hardest part of a shark’s skeleton, so the ocean floor is believed to be littered with them – even those that are millions of years old.

When megalodon teeth do find their way into human hands, they, naturally, attract significant interest for their size and history. Several renowned museums around the world have a collection of megalodon teeth, including the Natural History Museum, London, and the Smithsonian Museum, Washington DC, while a museum in Peru is believed to have a fossilised megalodon skull.

Megalodons may be extinct, but you can still encounter prehistoric creatures of the sea at Deep Sea World. From shark dives to feeds, join us for an exciting day among some of the world’s most exciting marine life. For more information or to book your tickets, visit the Deep Sea World homepage or give us a call on 01383 411 880.