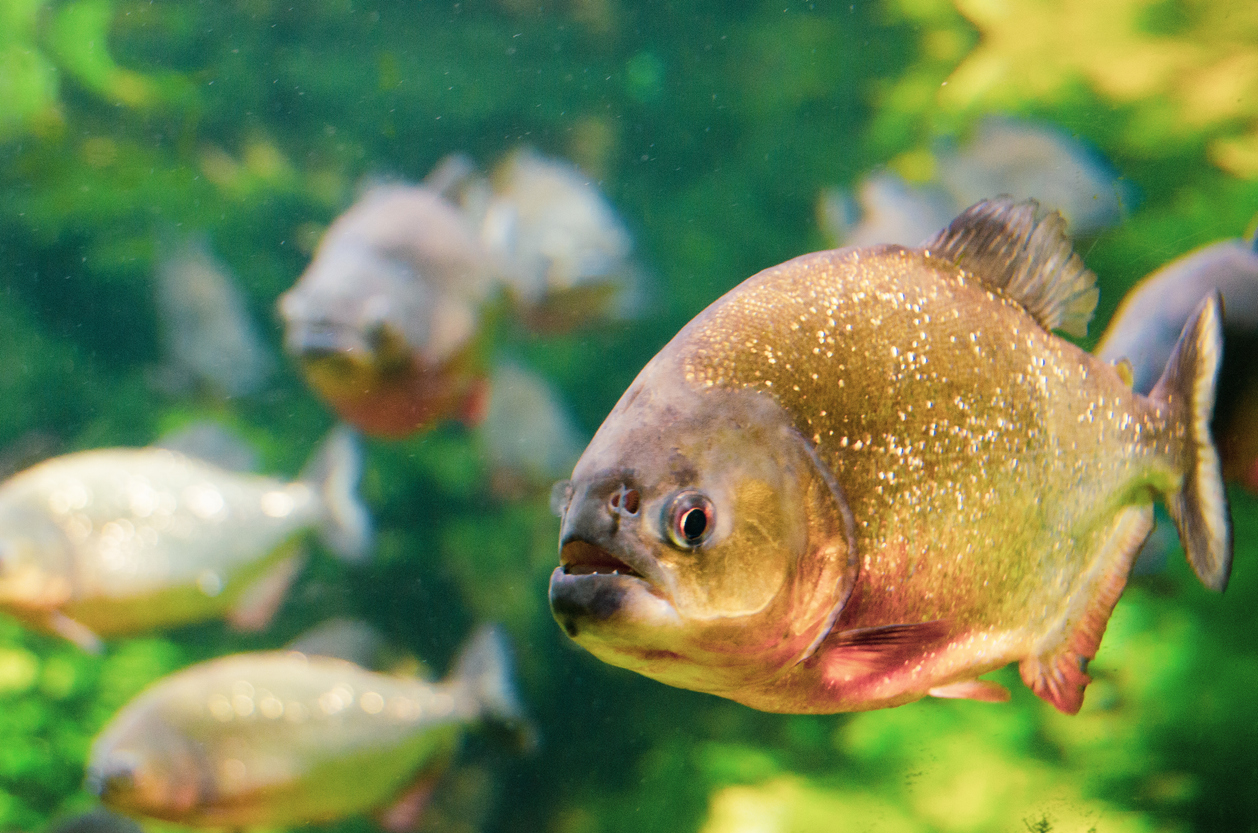 The Truth About Piranhas: South America’s Most Misunderstood Fish

Piranhas. You’ve seen the films and heard the stories, but are the rumours warranted? There’s no getting away from the fact that these predatory freshwater fish have earned quite the reputation, but, as with other animals like sharks, snakes and spiders, it’s often necessary to separate fact from fiction.

As is the case with so many animals, people should respect rather than fear piranhas. And to prove it, here we reveal some truths about South America’s most misunderstood fish.

What Are Piranhas and Where Are They Found?

The piranha is a freshwater fish that’s a member of the Serrasalmidae family – a term which means ‘serrated salmon family’, for the serrated keel which runs along their bellies. Biologists estimate there to be 40-60 different piranha species, though there could be more yet to be discovered.

Historically, piranhas have been described as extremely predatory, but recent studies suggest this isn’t always the case. Instead, they’re omnivorous, and spend much of their time foraging for food and migrating up and down the rivers in search of the perfect breeding and spawning spots.

One of the biggest myths about piranhas that needs debunking right off the bat is that they hunt their prey in mass shoals – an error which has contributed to their bad reputation. Sure, some piranha species, like the red-bellied, do swim in shoals as a means of defence, but there’s little evidence to show they hunt as a single unit.

Still wary of these big-toothed critters? Fear not: they’re found only in South America, where they live in rivers, lakes, basins and floodplains. So, unless you plan on taking a dip in the Amazon or a paddle in Paraguay, you’re unlikely to encounter one out in the wild.

What Do Piranhas Eat and Are They Dangerous?

Piranhas are omnivorous forage fish, meaning they’ll eat just about anything they can get, including meat, fish, insects and plants. Like many other species, they’re opportunistic, surviving on what’s available and taking chances where they can.

It has to be said, though, that piranhas have evolved to be highly adept predators. They have one of the most forceful bites of any bony fish, with powerful, dense jaw muscles and razor-sharp, interlocking teeth that are perfect for shearing and tearing flesh. The black piranha, in particular, has a devasting chomp, so you wouldn’t want to go tickling one.

But with all that said, piranhas aren’t all that dangerous to humans. They, like so many fish, would always rather avoid us, and have become fearful of fishermen in places like Brazil and Bolivia. Where attacks have happened, it’s usually because the fish are scared, boxed-in or confused by splashing and activity in the water – not because they’re looking to strip our flesh right down to the bone.

How Can You Identify a Piranha?

While it’s unlikely you’ll ever need to identify a piranha in the wild, they are a popular aquarium fish, so it’s always good to know what you’re looking at in a tank. Here, we take a look at the characteristics of piranha, from their typical size to their colour and markings.

Debunking the Myths About Piranhas

The myths and half-truths about piranhas are as murky as the depths of the Amazon, with tall tales telling of flesh-eating monsters, capable of stripping humans right down to the bone. So, as a service to these majestic freshwater creatures, we’re here to right the wrongs and bust the myths about piranhas.

Myth: They can skeletonise a cow in a matter of minutes

You know the scene in Jurassic Park in which a cow is lowered into the velociraptor enclosure? Well, this apparently happened in real life, according to former American president Theodore Roosevelt, that is.

According to Roosevelt, he witnessed a shoal of piranhas strip a cow to the bone while travelling the Amazon Rainforest, later describing them as ‘vicious creatures’ in his 1914 book, Through the Brazilian Wilderness. But while it’s true that piranhas would tuck into a cow if given half the chance, they rarely eat in shoals as Teddy’s story suggests, so we’re calling this one a myth.

Myth: They hunt in packs and attack at random

It seems like a lot of people have piranhas down as the thugs of the river, painting them as ruthless killers who hunt in packs, attack at speed and spend their days trawling the water for their next victim. This isn’t true.

As we’ve said, piranhas are usually solitary hunters, coming together every now and again as a means of defence – just like many other species of fish. They’re also omnivorous foragers, snacking on insects, worms and plants more regularly than they do fish and meat.

Myth: They attack and eat people

Now this one is definitely not true, so don’t let silly slasher films tell you otherwise. While piranha attacks do happen, the unfortunate victim usually only ends up with a very minor injury, after receiving a quick nibble from a curious or scared piranha. Attacks on humans are staggeringly rare, and rarer still are fatal encounters.

Of course, that doesn’t mean piranhas shouldn’t be approached with caution. When they shoal, that’s when they’re at their most dangerous, with the frenzy of feeding, coupled with a competitive edge, making them much more erratic and likely to bite.

Have we changed your mind on piranhas? We really hope so. These beautiful fish may have a bad reputation, but we think they’re just misunderstood. To learn more about piranhas, why not take a trip to Deep Sea World, where our piranha experts can fill you in about these wonderful creatures. For more information, visit the homepage.