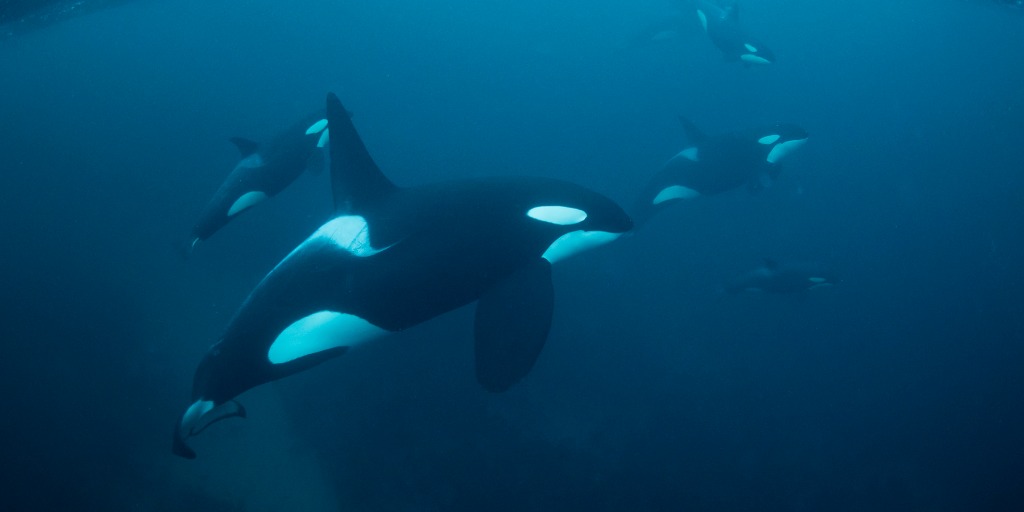 With a coastline that accounts for 10% of Europe’s total, Scotland has plenty of room for a variety of sea life to call their home. Across its waters, the diversity of habitats – from shallow inlets to deep-sea coral reefs – means we’re spoiled for choice when it comes to their vibrant and varied inhabitants – some of which may just surprise you!

You may be fooled by how chilly the water gets here, but incredible sharks, charming dolphins and huge humpback whales can all be found in Scottish waters, providing some amazing sights for both divers and those watching from above the surface. But since it’s not always easy to see these creatures for yourself in the wild, we thought we’d give you a rundown of some of Scotland’s most amazing sea life right here!

And remember, you can see a variety of amazing sea life for yourself at Deep Sea World! At Scotland’s national aquarium, we keep all of our marine life in conditions that mirror their natural habitat as closely as possible. Likewise, we also use natural Scottish seawater from the Firth of Forth, which provides essential minerals to all of our animals.

Conservation is a massively important part of what we do, housing endangered and rescued species in safe, comfortable environments so you can learn more about these fascinating inhabitants. But without further ado, here are a selection of Scotland’s most incredible sea natives.

The second-largest species of fish alive today, the basking shark can grow up to 12m in length. Despite their imposing size, they actually only eat microscopic plants and animals known as plankton. Seen during the spring, they can regularly be spotted at or near the surface of the water, swimming with their huge, gaping mouths wide open where they filter the seawater for plankton.

In the past, basking sharks were hunted here because of the oil found in their enormous livers. However, they’ve been protected from targeted fishing in British waters since 1998, though they still have to watch out for colliding with boats and getting tangled up in fishing equipment like nets and creel lines.

A staggering 36 tonnes and measuring up to 16 metres in length, humpback whales are known for their crowd-pleasing activity. If you’re lucky enough to see one in the wild, then you’ll usually be treated to an impressive display of breaching, lobtailing and flipper-slapping, all of which result in huge splashes and sounds!

Recognisable for their large, knobbly head and long, five-metre fins, humpbacks can be found all through the world’s oceans, but they usually make their visits to Scotland’s waters during the summer months, off the coast of the Hebrides.

At one point on the brink of extinction, we’re happy to say that sightings of the humpback have increased lately. Protected by UK and EU law, they’re another species that has to be careful not to be struck by boats or tangled in fishing ropes.

With their massive 2-metre-tall dorsal fins rising high from the water’s surface, and distinctive black and white markings, the orca is a mighty mammal. Growing up to 10 metres in length and living for as long as 90 years, they can be found all over the world, with some taking up permanent residence on Scotland’s west coasts such as Skye and the Small Isles. More temporary visitors can usually be seen on their east coast and northern waters though sightings can be rare.

Social animals that move around in groups of up to eight (known as pods), they’re known for their intelligent and inquisitive nature, but also their predatory feeding habits. Dining on seals primarily, they’re also known as ‘killer whales’ for their hunting ability. However, this is a bit of a misconception since orca aren’t whales but are actually the largest species of dolphin.

Yes, even dolphins can be found in Scottish waters! Charming and charismatic, these amazing creatures can be found in the Moray Firth (the most northerly point they live) and they’re also the largest dolphins in the world; some can even weigh up to 300kg! All that extra weight certainly comes in handy though since it keeps them nice and warm in these nippy Scottish waters.

Chanonry Point has earned a reputation as being the best place in the UK to see dolphins from the shore, thanks to a narrow spit in a deep channel. Here, the dolphins chase salmon from May to September when the tide is low, making them easily viewable as they follow salmon with the current.

Like all dolphins, bottlenose dolphins are very sociable, living in pods of 10-30 members, though some pods with as many as 1,000 dolphins have been spotted! It’s sometimes possible to see a mother and calf swimming side by side! Keep an eye out for the vertical lines on the calf’s side – a remnant of when it was curled up inside its mother.

Compact and bulky, porbeagle sharks are usually found several miles offshore because they prefer the deeper water. Dining on mackerel and herring, they’ve been referred to as ‘mackerel shark’ for their preference for the fish.

Relatively small in size when compared to other sharks, the porbeagle is fished for sport in some parts of the world, leading to the International Union for the Conservation of Nature (IUCN) classifying them as vulnerable. This status can vary in different parts of the world, but the classification is encouraging news, and it’s hoped it will lead to them being protected by law in the near future.

The most commonly-found shark on the southern and western coasts of the British Isles, Tope sharks regularly pop up in the waters of Scotland. Recognisable by their small, slim bodies and elongated snouts, they have a habit of migrating to far-flung parts of the world, with tope sharks tagged in the UK being found as far away as Iceland and the Canary Islands.

Like a lot of shark species, the tope is being threatened by overfishing because of their fins, flesh and oil being in high demand. However, Greenpeace International have made efforts to conserve the species, adding them to its seafood list – a scientifically-compiled list of species which should not be made available to buy in supermarkets across the world.

Looking to see amazing sea creatures for yourself? Join us for a day among some of the world’s most exciting marine life. For more information or to book your tickets, visit the Deep Sea World homepage or give us a call on 01383 411 880.